Parsons School of Design alum Heron Preston is currently one of the key players in the streetwear industry. The San Francisco-born creative came to New York City in 2004 and hasn’t missed a beat. He’s been called an artist, creative director, content creator, and clothing designer. He’s collaborated with Kanye West, Virgil Abloh, Gap, and Nike. In 2012, Virgil, Kanye, Matthew Williams, and Justin Saunders launched Been TRILL, which initiated a Kanye/Heron design team. Heron’s talents can be seen on everything from tour merch to Yeezy FW invites.

His most notable collaboration came after he returned from a trip to the Mediteranean. His overseas experience allowed him to see the first-hand effects of pollutants which prompted him to use his platform to advocate to promote sustainability in fashion design and manufacturing. His efforts led to a collaboration with the NYC Department of Sanitation in 2016. The zero-waste collection sold out immediately. Shortly thereafter, Heron signed a deal with New Guards Group and the Heron Preston brand debuted at Paris Fashion week in 2017. 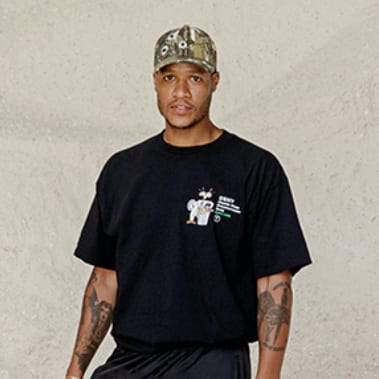 Yellowbrick believes that a student’s personal passion and hustle – rather than financial resources – should determine how far they can go. Along with our partners, our aim is to empower students who are passionate about streetwear to pursue rewarding career opportunities that can spark their interest and open doors to a fulfilling future.
Yellowbrick’s programs have the potential to change students lives by:
Heron’s scholarship is to empower up-and-comers to pursue careers in streetwear and related fields.
To apply: Enter your email below and then complete the scholarship form and short essay explaining what your career goals are and how you hope this scholarship will benefit your career.
Facebook Twitter Instagram Linkedin